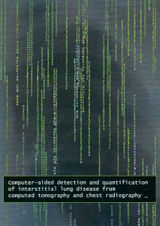 This thesis contributes to the development of pattern classification methods employed by computer-aided detection (CAD) systems, with the application of these methods to the automated analysis of interstitial lung disease (ILD) and tuberculosis (TB). Three different applications are considered. In Chapters 2, 3 and 6, we aim at detecting the presence of disease in chest radiographs. The purpose of a CAD system described in Chapter 4 is to pinpoint the locations of abnormalities in radiographs. In Chapter 5, a CAD system is described that estimates the progression of ILD in serial computed tomography (CT) scans. In many applications of CAD it is not possible to precisely localize lesions or affected areas in images that are known to be abnormal. Therefore, a CAD system has to be trained with weakly labeled data. In Chapters 2 and 3, two novel classification approaches are presented that deal with such data better than traditional classifiers. In Chapter 2, a classifier distinguishes between normal and affected radiographs by explicitly optimizing the area under the receiver operating characteristic (ROC) curve. This chapter introduces a novel heuristics for subsampling problem constraints which is shown to improve classification time and performance. Chapter 3 proposes to represent an image by comparing it with another image. A dissimilarity between two images consists of dissimilarities between the distributions of various local texture measurements. By comparing each image with different prototype images, several different classification results can be obtained and combined into a final image decision. The performance of this classification approach is similar to that of methods applied to fully labeled radiographs. In Chapter 4, a new method to set a reference standard for interstitial abnormalities in chest radiographs is described. Abnormality outlines are manually delineated in selected coronal slices of a chest CT scan and automatically mapped to a radiograph of the same patient. The CAD system performs pixel-wise classification of the lung fields and produces a color-coded probability map accentuating areas highly probable of being abnormal. The system is shown to perform not significantly different from two radiologists on severely and moderately abnormal regions. In Chapter 5, a novel CAD application is introduced. It compares corresponding 2D axial sections from the baseline and follow-up chest CT scans and yields an opinion whether this pair of sections represents regression, progression or unchanged disease. In the first stage of classification, image pairs exhibiting any change in the state of disease are separated from unchanged cases. In the second stage, the direction of an estimated change is classified into regression or progression. The accuracy of our system is not significantly different from that of two radiologists. In Chapter 6, the approach described in Chapter 3 is applied to the analysis of radiographs from TB screening programs. The dissimilarity-based approach is extended by applying it to fixed lung partitions, as well as to the complete lung fields, and merging the local and global classification results into a single image decision. The CAD system yields a probability for an image to contain TB-related abnormalities.