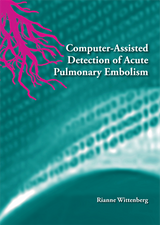 Pulmonary embolism (PE) is a common and often potentially life threatening disease. Severe morbidity and mortality can be prevented if PE is diagnosed and treated in time. CT pulmonary angiography (CTPA) has emerged as an effective method for diagnosis of PE, but interpreting a CTPA is complicated by the size of the image date set, the various PE look-alikes and also human factors such as experience and attention span. In this thesis, we therefore evaluated the performance of a computer-assisted detection (CAD) prototype for the detection of pulmonary embolism (PE) to help radiologists detect PE. The first part of this thesis summarises the latest technical development of CT scanners, the new challenges for protocol design associated with these new techniques and the options offered by new processing and evaluation tools. In the second part the standalone performance of a CAD prototype is described in 278 CTPA scans that had been consecutively obtained during night and weekend shifts. The CAD performance was compared with a reference standard obtained by consensus of three readers and with the reports made after acquisition of the clinical scans. The results suggested that CAD can help to find subtle isolated segmental and subsegmental emboli and to exclude PE. Furthermore, we found that image quality parameters and thus scanning protocosl effect the standalone performance more than scanner type, using 240 CTPA scans in 3 different hospitals. In the third part of this thesis we tested if CAD has indeed an impact on the performance of readers. Per study set up we used 6 readers with varying radiological experience to analyse the effect of CAD when CAD was used as a second or as a concurrent reader. Using CAD as a second reader in 209 CTPA scans, we showed an increase in readers' confidence and sensitivity without loss of specificity. Similarly as seen in the second part, we found the greatest impact of CAD on the detection of small segmental and subsegmental emboli. However, these results came with an increase of reading time, which is undesirable in clinical practice. When we tested CAD as a concurrent reader in 196 CTPA scans, we found that readers' sensitivity improved or remained at the same level and readers' confidence increased compared to the readings without CAD, but with a significant shorter reading time. In summary, CAD has the potential to aid readers to find patients with isolated segmental and/or subsegmental emboli, to reassure readers in excluding PE and to decrease reading time. However, before making CAD available for broader application in clinical practice, its impact on readers' decisions and patient outcome needs to be studied in a larger prospective trial.